Power Attack Batman Line - not as craptastic as you might think 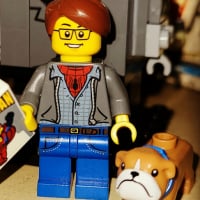 LibraryBoy Posts: 1,803
February 2013 in World of Toys Archive
I'm sure you've all seen these on the pegs at Target or whatever, they're the more kid-oriented Batman figure line, and they have a very "animated" look for something that's not actually tied into any show. I never really gave them much thought, but as I was wandering by the tiny toy aisle of the local supermarket, I saw a few of these and took a good look for the first time and actually liked what I saw. They're big and chunky and don't have much in the way of articulation (neck, arms, elbows, waist, legs... and no, I didn't leave out the knees, the actually don't bend!) but the design on some of the basic figures is really eye-catching (at least until they start getting into the weird specialty costumes - Fire Batman, Ice Batman, Froggy Went A Courtin' and He Did Ride Uh-Huh Batman, etc.), and they have that very specific "will look good on my shelf" factor.

Long story short, Twin Blade Batman came home with me and my groceries. Just a cool, basic looking Batman, decked out in the sort of blue and grey costume that reminds me of the Batman I grew up with (armored and with a different variation on the oval Bat logo, but hey, close enough). There was a black & grey version, too (Battle Gauntlet Batman or some such thing), but the nostalgia factor of the one I chose was too great to be denied. And yes, it will look damn cool on my shelf.

I may keep an eye out for the Robin from this line, too... different in design than any traditional Robin costume, but still kinda cool.
0 · Share on TwitterShare on Facebook