Wanderers in the 4th Dimension 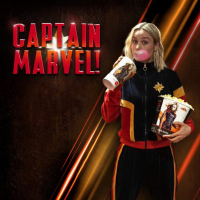 Fade2Black Posts: 1,457
August 2014 edited August 2014 in Other Comic Podcasts
I've been reluctant to post this here, mainly because we're a Doctor Who podcast, but since we recently added Titan's new line of Doctor Who comics to the material we review, I figure we now qualify.

For those who are unfamiliar with our podcast, we cater to an audience that enjoys modern era Doctor Who but would like to take the plunge into the classic material; though longtime Doctor Who viewers are just as welcome. I, along with two other regular co-hosts, are attempting to sequentially watch (listen to, in the case with lost episodes) and review every episode of Doctor Who since the series' 1963 inception. We just wrapped up the William Hartnell Era. Our classic coverage will go on hiatus while we cover series 8, but we'll be resuming right where we left off (i.e. the Patrick Troughton era) once series 8 wraps up. If you're planning to watch Doctor Who series 8, now would be a great time to start listening to Wanderers in 4D. (links to the podcast are available on my tumblr. site's main page, which can be accessed by clicking on the animated gif below).